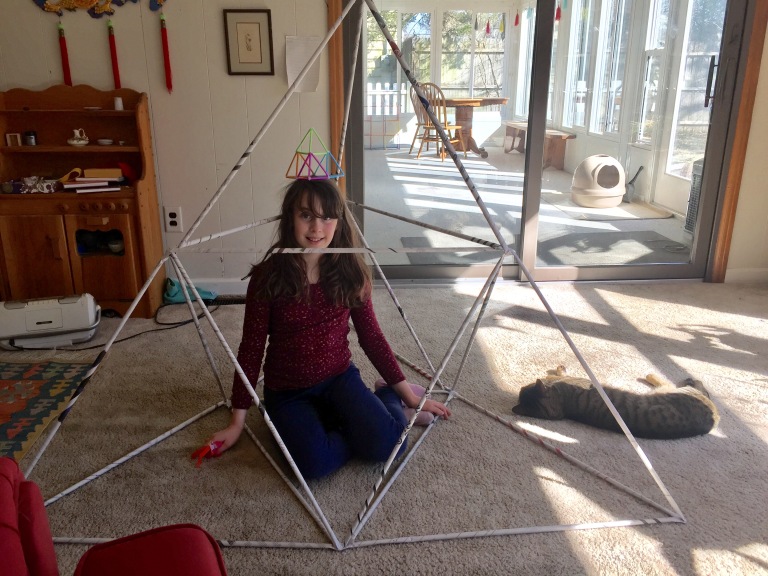 Jenn Kranenburg jumped right on it! Just an hour or so later I got this Tweet:

We discovered it is important to have equal sides length when constructing a square pyramid @QueenEPSChatham @mathinyourfeet #math pic.twitter.com/Nwye3bL1jQ

For summer I want to work with the 7th & 8th grade group on exploring fractal patterns in multiple 2D & 3D modes and media. I’m currently thinking about Sierpinski triangles & tetrahedrons using paper/rulers, folding circles, building with straws, and also with newspaper tubes….and then analyze the results.

Today I decided it was time to try some stuff myself.  I got out the straws & pipe cleaners. 10 straw lengths are equivalent to one newspaper tube.

Making one scaled-up tetrahedron was no problem. Making a Sierpinski tetrahedron at #bodyscale was not impossible for me, but it did slow me down.  One of the things about changing the scale of a math activity is that it creates new insights or challenges about previously familiar math. This shows up in the research about embodied mathematics as well as in my own personal experience today, and also when I scaled up pentominoes to help me figure out which pieces would tile. 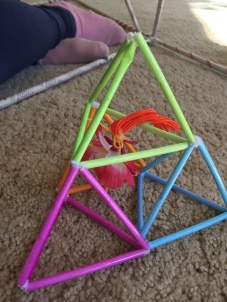 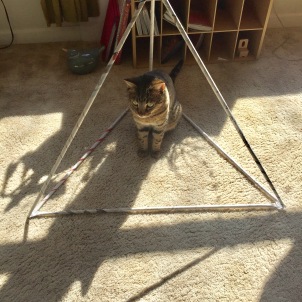 I ended my investigation having created Sierpinski Tetrahedrons at fairy, cat, and kid scale and am looking forward to trying out some other scaled-up geometric solids.

One thought on “Scaling up Sierpinski Tetrahedrons”

My Tweets
Follow Math in Unexpected Spaces on WordPress.com