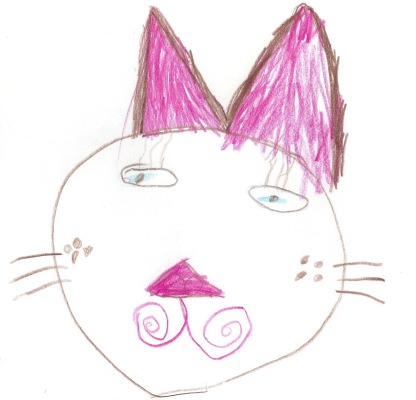 11yo using an announcer voice: Annnd, welcome to the Catland Podcast of math and science and nature. Today’s first episode of this awesome show we’ll be talking about a young kitty’s idea of positive, negative and equalitive numbers. So. Let’s take it away!

Announcer: So, do you know the definition of positive and negative?

Kitty (kid’s normal voice): Positive is plus where the number system goes up. Negative is getting less and less. Let’s have the audience pick a random number.

Kitty: Let’s take seven. It’s lower than all the many many numbers that last to infinity. Negative numbers are below the number system we use except…my two question are:

– Don’t numbers always have numbers higher than it, and if so is that a negative number because you can count down…like in the positive number system?

I just want Catland to be thinking about how does that apply to real life or is it just an idea.

Me: Well, if it was just an idea could we still think about it?

Kitty: Yes. However, how does it apply to real life?

Announcer: Well, that’s the Question of the Week! How does the negative number system apply to real life? So, young kitty, what do you think is “equalitive numbers” the number system you invented?

Kitty: Well…equalitive numbers, they have to be a number system, even a pattern that has everything that’s equivalent to it. I don’t know advanced math yet but there could be a number system out there waiting to be discovered that has all the numbers equal.

Me: Can you give me some examples of equalitive numbers?

Me: Can you give me an example? Like if I said “nine” what would the equalitive number be?

Me: Okay, let’s try something a little bigger, let’s say 50.

Kitty: Maybe five tens and there could be an equalitive  symbol for that to symbolize five 10s.

Me: Yeah, so maybe we already have that symbol? Maybe we don’t need to invent a new one?

Kitty: Do we have that symbol?

Me: But maybe 10s are the symbols?

Kitty: But there could be another symbol instead of having to write out all those tens. Every number could have an equivalent symbol and that way you could, for example, 1 could have a symbol and then…

Me: Well, okay. I look forward to your next podcast when you’ve thought about this more and figured some stuff out. It’s very interesting.

My Tweets
Follow Math in Unexpected Spaces on WordPress.com